Discover Athens on a bike!

An initiative of Technopolis and the Athens Bike Festival, under the auspices of the City of Athens.

So many things to discover in Athens riding a bike!

1. Technopolis City of Athens – Industrial Gas Museum: The old Athens gasworks plant, now named Technopolis, was turned into one of the most popular culture hubs of the city.
2. Kerameikos cemetery: The most important burial ground of ancient Athens. The small museum within the archaeological site showcases exhibits from the Kerameikos excavations.
3. Pl. Agion Asomaton: The little square hosts the church of Agion Asomaton, built in the 11th century AD.
4. Τemple of Hephaestus: Broadly known as «Thissio», is one of the best preserved ancient temples, partly because it was transformed into a Christian church.
5. Ancient Agora: Founded in the 6th century BC, the site was the center of the city for the following 4 centuries throughout the Classic and Hellenistic years.
6. National Observatory: Also known as the Sina building, it was named after the grand donor of the 500.000 drachmas that made its foundation possible.
7. Cine Thission: With an inconceivable view towards the sacred rock of Acropolis, this movie theater is among the top open air ones of the world.
8. Areios Pagos Hill: Throughout the years of the Athenian republic, this judiciary body specialized in cases of murder.
9. Acropolis: The top of the rock is inaccessible from all sides, except the western one, where Propylaea, the gateway is situated.
10. Herod Atticus Odeon: Built in 2nd century AD sponsored by Tiberius Claudius Herod Atticus. Since 1957, it stages art festivals.
11. Theater of Dionisos: A site used for the celebration of the cult dance in honor of the god of Dionisos. The circular dithyrambic dance of the worshippers led to the creation of ancient tragedy.
12. Acropolis Museum: The new Museum was inaugurated in 2009 with 14,000 sq. m. of exhibition space. It was built on the basis of the architectural study of B. Tschumi and M. Photiadis.
13. Hadrian’s Arch: A roman arch that leads to the Temple of Olympian Zeus. It was erected to honor Hadrian in 131 AD while he was in Athens.
14. Temple of Olympian Zeus: The sanctuary was established, according to Pausanias the traveler, by Deukalion to honor Zeus who rescued him from the deluge.
15. Zappeion Megaron: The first building in the world to be erected for the modern Olympic Games. Sponsored by Ε. Zappas and inaugurated in 1888.
16. National Garden: The National Garden is the first organized green park in modern Greece. In the National Garden you are not allowed to ride a bike. You may walk rolling your bike alongside.
17. Greek Parliament: Inaugurated in 1843 as the Palace of King Otto. A century later, it was transformed to the building of the Parliament and the Senate.
18. Syntagma Square (Constitution Square): Originally named «Palace square», it took its present name after the uprising of the 3rd September 1843, when King Otto was obliged to form a parliament and to grant a constitution.
19. Grande Bretagne: Built in 1842 as a house. In 1874, it was renovated and turned into a hotel. In 1888, it was one of the first buildings in Athens to get electricity.
20. Agia Irini Square: The temple of Agia Irini was initially Athens’ cathedral. Nowadays, the square is one of the livelier parts of the city with many cafés and restaurants.
21. Monastiraki Square: Named after the old church of Assumption, that is situated in the square and used to be part of the Kareas Monastery on Hymettus mountain.
22. Varvakeios Market: Inaugurated in 1886, it has remained active ever since, housing a large number of food stores.
23. Athens Town Hall: Building started in 1872 following a loan of 130,000 drachmas from the National Bank. The building was finished in 1874.
24. Kotzia Square: The buildings around the square are fine examples of the Athenian architecture. An archaeological site is also located in the square.
25. Omonia Square (Concord Square): Named in 1862 after hosting the celebration of the reconciliation of Pedini and Orini, two opposing political parties.
26. Kapnikarea Church: Dedicated to Virgin Mary, it is owned by the Athens University and is named “Sacred University Church”. Fotis Kontoglou has painted the surviving painting walls.
27. Ermou Street: One of the first streets to be laid out in modern Athens. The objective was to be the central commercial street. It is not a coincidence that it was named after the god of commerce, Hermes.
28. Tripodon Street: Located in Plaka, it is considered the most ancient street of Athens because a large section is used since the ancient times and the name remains the same for almost 25 centuries.
29. Roman Agora: It was built between 19 and 11 B.C. with a donation of Julius Caesar and Augustus.
30. Metropolitan Church of Athens: The orthodox Cathedral of Athens is dedicated to the Annunciation of Virgin Mary. 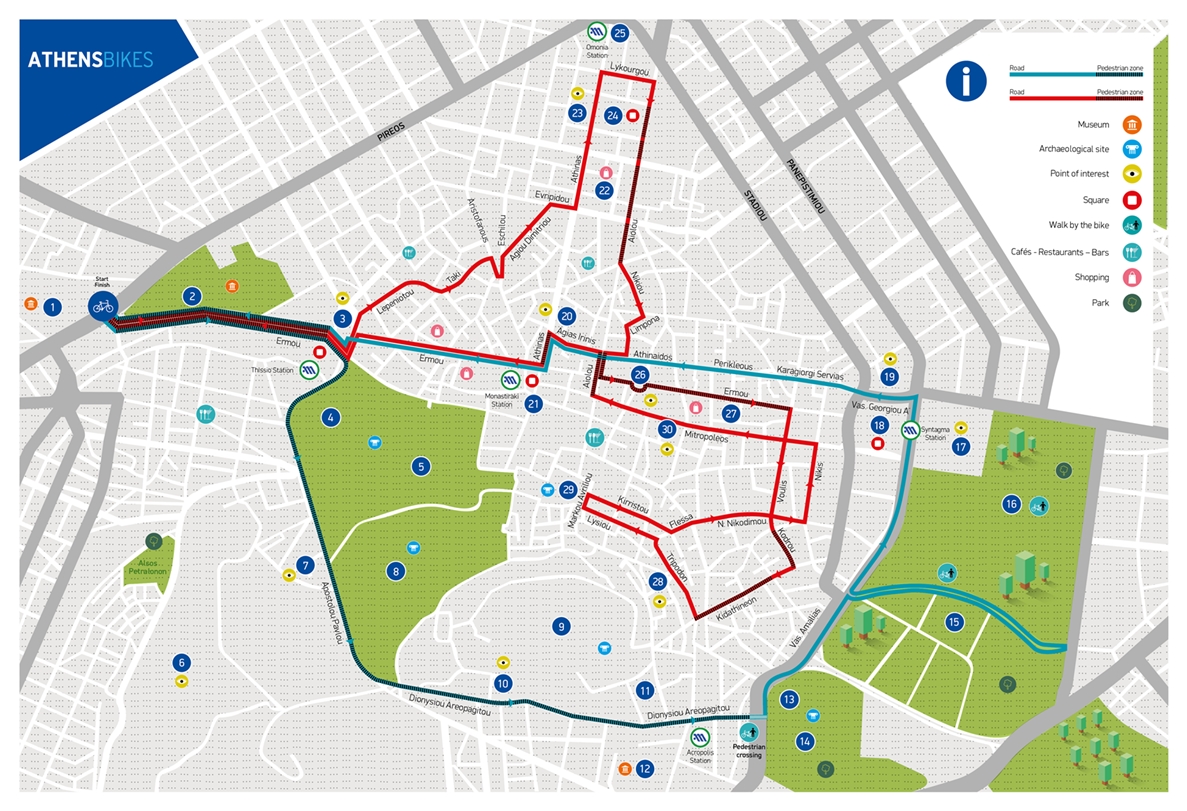